ILC members in Bangladesh are rallying on the streets of Dhaka, demanding justice for an elderly indigenous Munda man who was killed on August 20th in a village in Satkhira district, southwestern Bangladesh.

The man, identified as 65-year-old Narendranath Munda, died after about 100 men armed with homemade weapons surrounded the village of more than a dozen Munda families and attacked the villagers with the alleged intent to grab their land, according to the villagers.

ILC member Kapaeeng Foundation, which works closely with indigenous communities in the country, states that the land grabbers have been threatening the indigenous Munda families for many days to evict them from their lands. Local police are now stationed in the village for the protection of the villagers, as many of them are still living in fear.

“We demand exemplary punishment of the land grabbers and killers of Narendranath Munda. At the same time, we urged the local Police and Administration to provide all needed support to protect the lives and lands of Munda people in Dhumghat,” said Pallab Chakma, ILC Council Member and Executive Director of Kapaeeng Foundation. 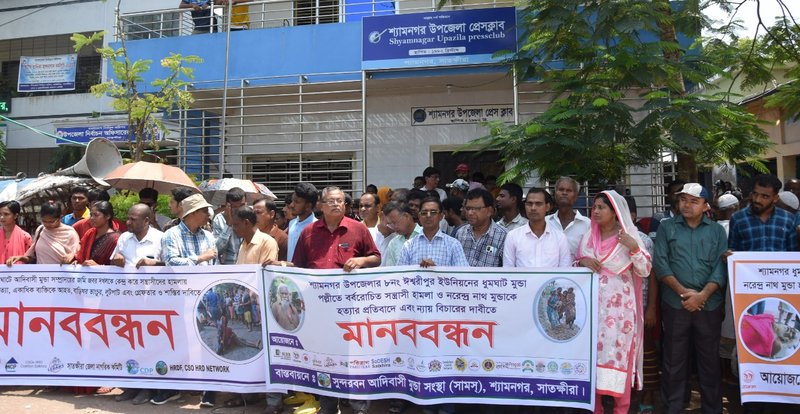 ILC members and partners protesting in the streets of Dhaka, Bangladesh. Photo: ALRD

ILC Asia condemns this kind of violent treatment of indigenous communities and land rights defenders. Indigenous peoples and human rights activists should be allowed to peacefully do their work and defend their communities in the face of militarisation, destructive development, and discrimination. ILC Asia supports our members who have worked tirelessly to protect the rights of indigenous peoples and local communities, especially in the face of criminalisation and violent threats.

Despite international recognition of the important role that indigenous peoples play in the preservation of the environment, governments are yet to take concerted action to fully protect their rights.

Together with ILC member organisations in Bangladesh, we demand the Bangladeshi authorities immediately take effective steps to stop any act of violence and harassment against indigenous rights defenders, ensure justice for Narendranath Munda's killing and redress the grievances of his family.

International Land Coalition (ILC) Asia is a membership-driven network that consists of 59 national and regional civil society organisations across 14 countries in Asia, whose vision is to achieve a just, equitable and inclusive world in which land rights are secure and poverty is eradicated. Members of ILC in Bangladesh have convened a national platform named the National Land Coalition (NLC). The platform seeks to empower farmers, rural women, and indigenous peoples in claiming their land rights and access to natural resources.